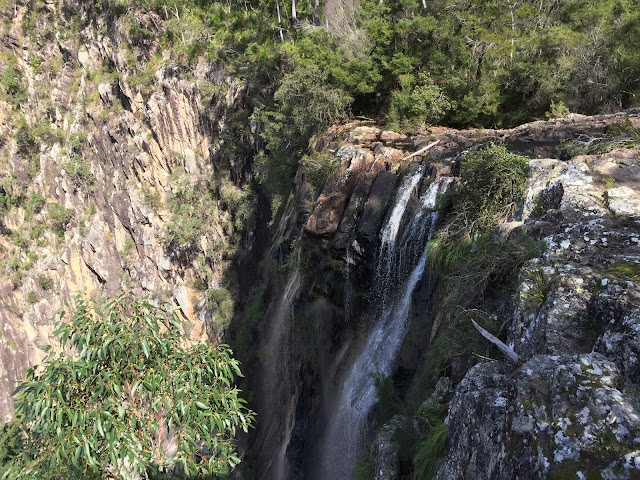 With an approximately 50 minute drive ahead of me, I left nice and early to arrive at Minyon Falls before too many people turned up - which ended up being a good idea as it was becoming quite crowded (relatively speaking) by the time I wad done and heading out. The road in involved a lot of back country roads, all sealed apart from the final stretch to the carpark, but rough and narrow in places.
Arriving at the Minyon Falls lookout, I took in the sight of the top of the falls from the viewing platform that juts out over the cliff before setting off counter-clockwise on the Minyon Loop - starting at the lookout, then slowly descending through the rainforest to the base of the falls, 100 meters below.

The last part of the track to the base is a slightly tricky scramble over some rocky terrain but, with that cleared, the falls emerge in a nice open section as they cascade down to the pool below. The top actually overhangs slightly, rather than being merely sheer, so the water drops straig…
Post a Comment
Read more 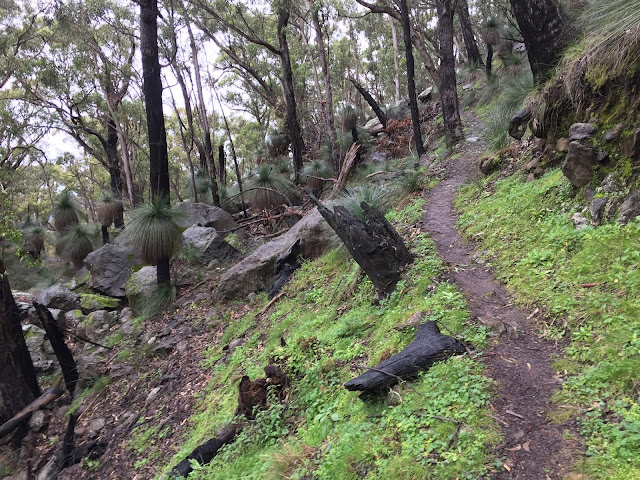 What a difference 24 hours makes! Cool, gray, and rainy conditions for my second mountain peak in two days - Mount Exmouth. I do prefer the cooler weather and, unlike the previous day, I only saw a single person on the walk and that was on my way back.
The major downside to this 17km walk is that the first 6km (so 12km out of the return distance) is along a maintenance trail and is really quite boring. There’s not much to look at apart from the forest immediately on each side of the road and it becomes tedious quite quickly. The persistent rain also made it a little muddy underfoot, particularly on the return leg.
It is a significant relief to hit the turnoff for Mount Exmouth - immediately, the track is more interesting and some good views appear within the first few hundred meters. The track is only steep in a few places but it is a steady uphill climb the whole way (approximately 2.6km). The flora along the way is very varied and pretty and good views present themselves a number of …
Post a Comment
Read more

A glorious day for my first hike in Warrumbungle National Park - I wasn’t expecting 22 degrees and clear, sunny skies in the middle of August. The conditions made for some great viewing from the lookouts and peaks along the way.

I undertook the Breadknife and Grand High Tops loop walk with a bonus detour to the peak of Bluff Mountain - it only added 3km but over quite a steep track. The views from the peak made the extra effort of the side trip well worthwhile.
This “up” part of the loop is quite an accessible walk - the first half even features section of brick pavement and some comfortably wide stairs. It’s not until after Breadknife that it begins to feel like a “real” hike, with the trail becoming narrower, more winding, and rockier underfoot.
It was busier than I expected, with a few groups as well as singles and doubles out on the path. I dislike encountering large groups on a trail, as they move slowly as a rule, are often loud, and can be a pain to pass. There were certainly some…
Post a Comment
Read more 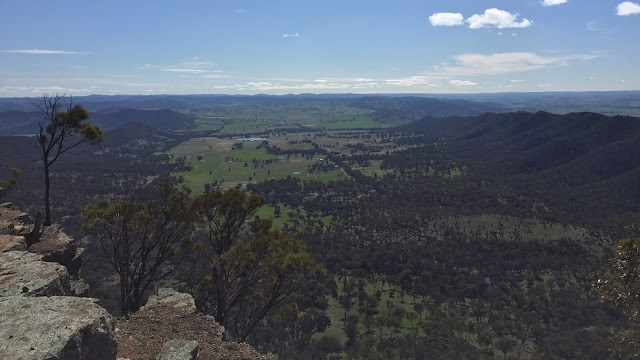 Today I drove out to Nangar National Park - located midway in a triangle made up of Orange, Parkes and Forbes. Getting there was a bit of an adventure - the access road is an unsealed narrow track with lots and lots of causeways as both it and a river wind there way up the gorge, criss-crossing each other as they go. Most are concrete but a few are just loose stones. Heavy rutting getting on and off some of the causeways also made things a little hairy.

Once safely parked, it’s about 1km to the actual track head, following a 4WD road. An absolutely lovely hike though, with an incredible and expansive view from the summit of Mt Nangar. The walk starts out with a gentle slope but gets quite steep and rocky in places as it makes its way up with mountain - there about a 400m gain in elevation. Very pleasantly, I had both the track and the view all to myself - I didn’t see another person for the duration. 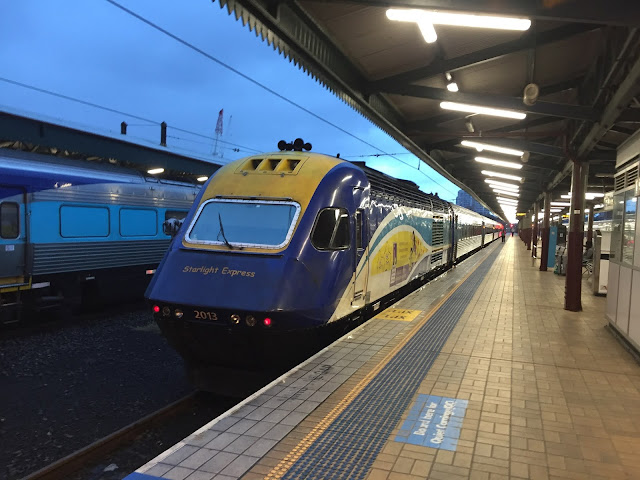 I began my trip by heading off to Orange with an early morning departure out of a gray and drizzly Sydney Central. I hadn’t been on an XPT since the early 90s, so the train nerd inside me was quite excited to be boarding one again before they’re retired in a few years.They’re certainly showing their age and squeak and creak a bit but it’s a fairly comfortable and scenic way to travel with plenty of legroom and space to move around.
One downside is that there aren’t any mod-cons to speak of - no WiFi, no USB power, not even proper coffee from the buffet: just hot water and a coffee bag! The choice between first class and economy is also really just a choice between good legroom and slightly more legroom - the seats are the same and there’s no additional service or food included.

After picking up the rental car, I headed for Mount Canobolas - the highest peak in the Central West. Unfortunately, the hiking wasn't as nice as I'd hoped and the view from the top was obfuscated. The su…
Post a Comment
Read more 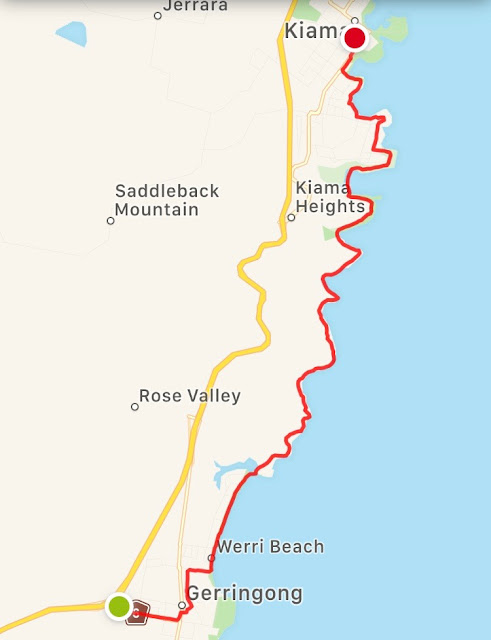 Distance: ~14.5km (From Gerringong Train Station; subtract a few kms if starting from the official start point at the northern end of Werri Beach)
This is the southern part of the Kiama Coast Walk (I'd previously walked the Minnamurra to Kiama section - not an unpleasant walk but a lot of it was through residential streets with no view to speak of).

A relaxing coastal walk with some pleasant scenery made up of lots of rolling green hills, cliffs, and ocean views.
An easy way to complete the walk without bothering with a car is to take a train to Gerringong Station and complete the walk at Kiama Station for the trip home. Starting at Gerringong Station adds about 2kms to the trek but it's easy walking through suburban streets. There are a few takeaway places on the main street, if you need to fuel up before the walk.


After leaving the town behind, the views quickly switch to green fields and sea as far as the eye can... see.


All up, a pleasant and very accessible walk. The path is s…
Post a Comment
Location: Gerringong NSW 2534, Australia
Read more 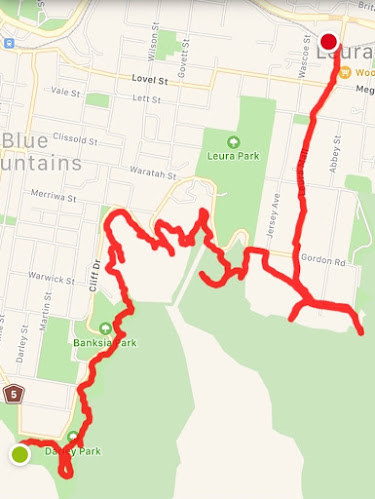 As can be seen on the map below, this was a wonderful, meandering walk through rainforest, with many side treks to visit the various lookouts along the way:


There are many lookouts along the way, some requiring a little bit of a detour (but usually worthwhile).

The path is a little rough in some sections - there is still evidence of the recent flood damage (with the worst hit section still closed, requiring a minor deviation).

If you enjoy the look and feel of cool climate rainforests, you're in for a treat on this path.

Bridal Veil Falls Lookout requires of detour off the path but it absolutely worth it - photos cannot do it justice:


Well worth the walk and finishing in Leura gives an easy walk into the shopping street or railway station to continue the day.